Head of School Darryl J. Ford and Jen Ketler, faculty member and secretary of Penn Charter's chapter, presented awards to each student. And Travis Larrabee, director of Upper School, introduced each inductee to the audience. 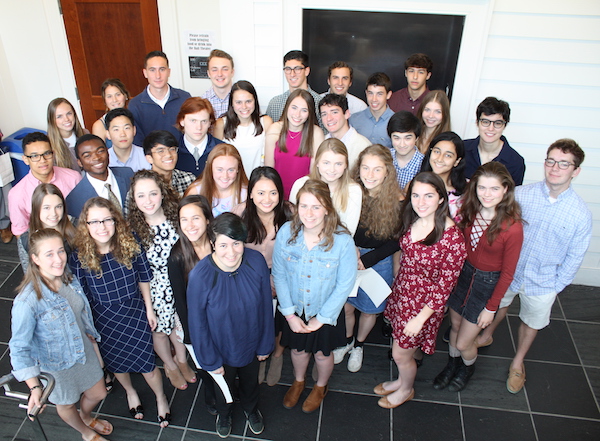 "I was inspired by all the students," he told the audience of parents, teachers and Upper School students. And he offered them two pieces of advice, drawn from his own experiences.

First, he said, be kind to one another. He spoke of his immigration to the U.S. and how his family found safe haven in Philadelphia: "We didn't speak English, we were poor, and we were afraid." But, he said, strangers treated him with kindness and respect from the time his family arrived at the airport from Kinshasa. Quoting William Wordsworth – "The best portion of a good man's life is his little, nameless, unremembered acts of kindness and of love." – he advised students to summon empathy for those who may not look or worship or speak as they do.

His second piece of advice, drawn on his experience interviewing applicants for Harvard, was: "Keep who you are – what is unique about you – your thoughts, your ideas." Be intellectually curious, he said, and don't become what other people want you to be.

"Be comfortable with your own skin," Tulante said. "If you don't stand up for who you are ... you are going to regret it."