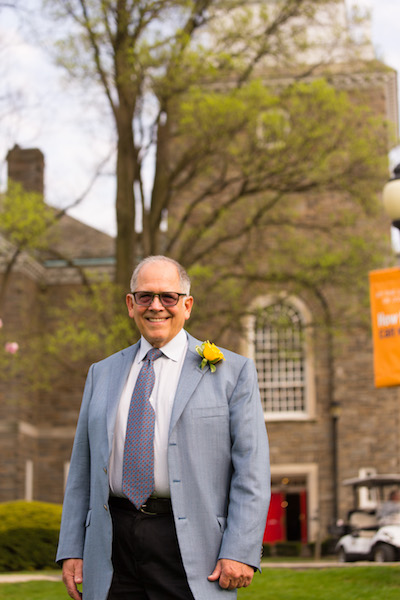 Michael J. Ross received the Alumni Award of Merit. His career spans 15 years in venture capital, following 21 years as a senior operating executive for leading biotechnology companies, including Genentech, where he served as team leader for biotechnology like Humulin® and and Roferon®.

Ross was presented with the award by classmate Harry S. Cherken Jr. OPC '67 on behalf of the Alumni Society. "Sitting in [the Meeting Room] as students," Cherken said, "we would gaze at the list of alumni names on wall." Ross, he continued, "possesses a distinct humility and overwhelming intelligence," and in the oft-repeated words of Jack Gummere when he spoke about a student achiever, "it comes as no surprise" to Ross's classmates that he would receive the Penn Charter Alumni Award of Merit.

"Thank you," Ross said, "for the great preparation for rest of life: academic preparation, teaching the difference between right and wrong, teaching of the need to give back to society, and teaching the importance of taking risk. Taking the road less traveled, that’s me."

Ilana H. Eisenstein was presented the inaugural OPC Vision Award by Matt Kessler OPC '99. The award is given to "a graduate of the William Penn Charter School whose exceptional accomplishments have brought distinction 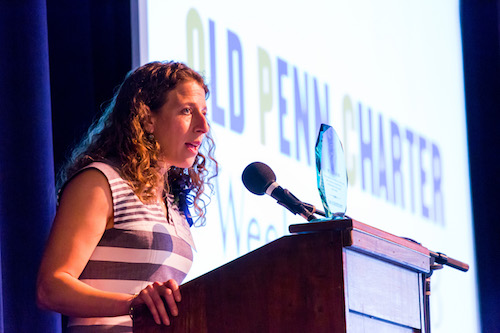 to their emerging career or calling." Eisenstein, an attorney, worked for the U.S. Department of Justice for 12 years—eight years as a federal prosecutor and four years for the Solicitor General's office, where she represented the United States government in the U.S. Supreme Court. Today she is a partner at the global law firm DLA Piper.

Bill Quinn thanked the Alumni Society and Head of School Darryl J. Ford for the Honorary 1689 diploma. "It is truly an honor," he said. "My father always said to me if you love what you do, then it's not really work, and I love being here at Penn Charter." Quinn also expressed his regard for his colleagues: "I truly appreciate my staff, the facilities staff, a dedicated group of people who like what they do and like being here at Penn Charter. This honor has my name attached to it, but without them I would not be here standing before you today."

Assistant Head of School Beth Glascott introduced the presentation of the Honorary 1689 diploma to Sandy Portnoy. "Sandy was also an early adopter of technology in her science classes and used computer probes and simulations, graphing calculators and SmartBoards with ease," Glascott said. "Equally as important, Sandy was one of the teachers who supported the success of young women in and out of the classroom in those early days of coeducation."

Portnoy said she was humbled by the honor and proud to join the ranks of the other members of the class of 1689." At Penn Charter I have found a way to grow professionally, meet new and interesting people, and feel supported in good times and bad," Portnoy said of her 28 years at PC. "I have had the opportunity to try new endeavors, develop courses and hopefully endow students with a love of learning and science."