Penn Charter recognized Upper School students on May 22 with end-of-year awards honoring their contributions in areas such as leadership, academics, the school’s service learning program, and more. 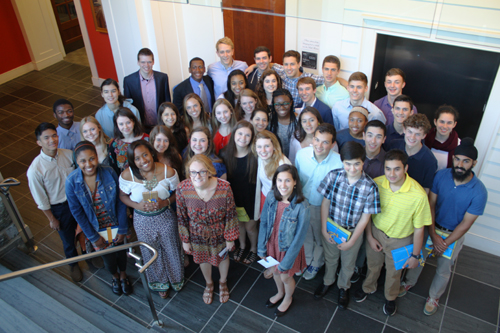 The following prizes were awarded.

THE ROBERT C. PORTER BOWDOIN PRIZE - To a member of the Sophomore Class who has demonstrated leadership in academics and who has made a significant contribution to school life.

CLASS OF 1897 PRIZE - To a member of the Junior Class who has combined high scholarship with character and leadership in school activities.

WILLIAM C. SHIELDS 3rd MEMORIAL PRIZE - To a student who has completed Ninth Grade with an outstanding record in character, scholarship and sportsmanship.

HARVARD CLUB AWARD - To that member of the Junior Class who is deemed the most worthy by reason of his/her scholarship, character, school spirit, influence upon his/her fellows, and general ability. Note: Per instructions from the award sponsor please select one student only.

HENRY A. DRESSER MEMORIAL PRIZE - To an outstanding member of the Tenth Grade.

RICHARD S. CROSS JEFFERSON SCHOLAR AWARD - To an outstanding Junior Class student in academics and extracurricular activities given by the University of Virginia Club. Note: Per instructions from the award sponsor please select one student only.

WILLIAMS COLLEGE AWARD - To a member of the Junior Class who has demonstrated intellectual leadership and has made a significant contribution to the extracurricular life of the school. Note: Per instructions from the award sponsor, please select one student only.

THE COLBY COLLEGE BOOK PRIZE IN HONOR OF ANDREW PEFF OPC ’07 – To a member of the Junior Class who has shown outstanding academic achievement and has made substantial contributions to the school and local community.

SERVICE LEARNING AWARD - To the student(s) who has most closely fulfilled the ideals of service to the community through active participation in the school’s Service Learning program.

SERVICE AWARD - To any member of the student body who has given continuous service to Penn Charter over a period of years.

D.J. WILLIAMS AWARD - To a student who has made a significant contribution to journalism at Penn Charter in memory of D.J. Williams, OPC’77.

S. WEIR LEWIS, 3rd MEMORIAL PRIZE - To an outstanding member or members of the Junior Class, in English and French, as a tribute to Clifton Lisle and to Oliver P. Hodge who were his teachers in these subjects.

CLASS OF 1980 AWARD - To a senior who does the most to promote unity within the class.

MATHEMATICS AND SCIENCE - To a member of the Junior Class who has demonstrated the highest level of motivation, commitment and achievement in science and math classes.

THE AMERICAN ASSOCIATION OF PHYSICS TEACHERS’ AWARD - To the outstanding student in the first year physics course.

THE ROBERT D. TORREY AWARD - Honors an Upper School student who has shown dedication and achievement during his or her years in the science program.

THE ROBERT F. CHAPMAN OPC ’36 FUND FOR SUSTAINABILITY AND ENVIRONMENTAL STEWARDSHIP PRIZE – To a member of the Junior class whose talents in the sciences and passion for nature recall Robert F. Chapman’s lifelong application of scientific understanding to environmental issues.

MUSIC AWARD - To a member of the Upper School who has made an outstanding contribution to the music program through both talent and leadership.

LOUIS SAVINO CHORAL AWARD – given to an upper school student who has distinguished him/herself through an extraordinary commitment to Penn Charter’s choral musical program.

LOUIS ARMSTRONG JAZZ AWARD - given to a student in recognition of outstanding achievement in the field of jazz, as demonstrated through superior musicianship character, and individual creativity.

JOHN PHILLIP SOUSA BAND AWARD - given to a student in recognition of outstanding achievement and interest in instrumental music, for singular merit in loyalty and cooperation, and for displaying those high qualities of conduct that school instrumental music requires.

HISTORY PRIZE - To the Senior who has demonstrated general excellence throughout the U.S. History course during their Junior year.

J.P. HARLAND PRIZE - To that member of the Junior Class or Senior Class who has been the best student in Latin during his/her years at Penn Charter.

SPANISH PRIZE - To a student(s) that has clearly demonstrated a true commitment to understanding the culture of Spanish speakers as well as to mastering the Spanish language.

LAWRENCE W. KUNKLE AWARD – To a senior who best exemplifies the qualities of creative ability, diligence and service that Lawrence Kunkle exhibited as a teacher at Penn Charter.

JONATHAN HOLMAN SMULLENS AWARD - Awarded in memory of Jonathan Smullens, Class of ‘79, to a senior who has made particularly significant progress during his/her senior year.

DRAMA PRIZE - Awarded to an Upper School student who has made an outstanding contribution to the dramatic arts at Penn Charter.

PETER KISHINCHAND MEMORIAL PRIZE - Awarded in memory of Peter Kishinchand OPC’91, to a student who has made a major contribution to the arts programs at Penn Charter through dedication to the technical aspects of artistic productions.

ASSOCIATION FOR COMPUTING MACHINERY AWARD FOR BEST TECHNOLOGY PROJECT - recognizes the student(s) making the best use of technology to complete a major academic assignment. This award is sponsored by the Dining Philosophers, the University of Pennsylvania's student chapter of the Association for Computing Machinery (ACM).