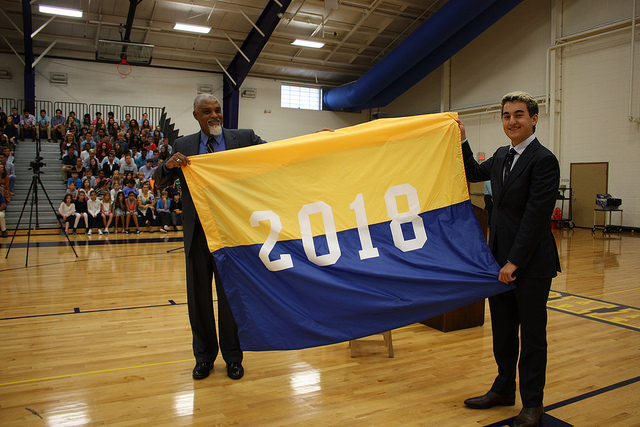 Head of School Darryl J. Ford unveiled the theme of the 2017-18 school year, the Quaker Testimony of Peace, at the 2017 All-School Opening Assembly. Ford welcomed students and teachers back to Penn Charter following a long summer.

"Making worldwide peace in a big way is complicated,” Ford said. But Penn Charter can play its own role in promoting peace by being “active peacemakers in the hallways of our schools and on the playground.”

Ford discussed his own idea for spreading peace, telling the 138 new Penn Charter students in attendance about “talk it out" chairs, where students in the classroom sit down in two chairs to talk things out and resolve any present conflicts with words. “How great would it be if we all agreed to find the 'talk it out' chairs, a ‘talk it out' table or a ‘talk it out room’ to meet conflict head-on and to become active about peacemaking?” Ford asked.

More than 900 students from grades 1 through 12 came together in Dooney Field House with faculty (including 20 new teachers), staff and school leaders to usher in the new school year, one Ford hoped would bring about big challenges that lead to exciting conclusions, all bookended by the Quaker Testimony of Peace.

“I know it will be one of great learning and growth, friendships and even challenges,” he said. “Yet, I know that if we use peace to guide our actions with each other, it will be a year like no other.”

Jake Cutler, president of the Class of 2018, discussed his journey as a Penn Charter lifer with his peers, and how the last 12 years have helped him grow into a stronger, more confident person, one that has opened him up to trying new things – he pointed to his bleached blonde hair, a new summer addition, to laughs from the room.

“Many students have said they felt nervous or scared to make new friends when they come to Penn Charter,” Cutler said. “They might have felt alone and vulnerable, but at the same time, they had a chance to create their own image among new potential friends. For the new students, and even the students who are coming back, do not hesitate to say hi to people you don’t usually talk to. Everyone at this school is special in some way.”

Most importantly, Cutler told his peers and the younger students, savor your time at Penn Charter because it indeed flies. This sentiment was echoed by Jeffrey Reinhold, clerk of Overseers, who also addressed the room.

Reinhold, a father to a Penn Charter lifer, directly addressed both the Class of 2018 and Class of 2029 (current PC first graders) as the 328th school year at Penn Charter commenced. He urged the senior class to think of those seniors who came before them and the example they set, and told the youngsters to cherish the journey they are about to embark upon.

Reinhold also addressed Cutler, his neighbor in Center City, marveling at how fast Jake had grown from young boy to senior class president, an epic journey that will be capped for the seniors at Commencement on June 9, 2018.

“Where does the time go?” Reinhold asked.

View a photo gallery from the 2017 Opening Assembly.