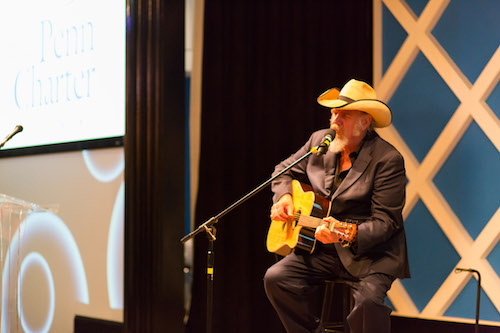 Grammy-winner Ray Benson OPC '69 spent the day at Penn Charter before performing at the Downtown Reception on Jan. 26.

Benson is the frontman for renowned Texas swing band Asleep at the Wheel. With his relaxed, easygoing style, he borrowed a guitar from PC's music department and played for the entire Middle School, for second graders who were learning country line dancing and for Upper School music students.

Then he spent the evening performing for alumni, parents, faculty and several of his former classmates.

Sponsored each year by the Alumni Society, the Downtown Reception was a celebration of music that recognized PC's own talented band musicians, who warmed up the crowd — and inspired some dancing — with a mix of modern and traditional music.

The PC band program celebrates its 25th anniversary this year!

See photos of Benson at school and at the Downtown Reception.